Enjoy 3D Digital, Special Effects at Home! This unit harnesses the power of 3D and brings it right into your own living room... faster than you can say WOW! After years of research, a group of scientists and engineers have finally achieved what many have considered to be the impossible: Convert a standard 2D video image into a true, holographic-like 3D projection - in real time. What this means is that you can now watch virtually all of your favorite TV shows and sporting events, your entire collection DVD movies, your entire library of home videos and play every video game you have ever owned -and do it ALL in Real 3D!

3D Into The Deep Santa Barbara

From the depths of the ocean, To the chill of the Arctic, To the thrill of the jungle...

You are invited to experience the plight of our fragile planet and its changing environments, in a totally new way, in cutting-edge 3D! Hosted and narrated by Walter Cronkite, SOS Planet uses state-of-the-art 3D and digital animation to explore three of the planet's most troubled environmental areas. With the immersive effect of 3D and stunningly realistic computer-generated animals, this giant screen film plunges audiences into lush environments, blending live action and animation to illustrate some of the greatest dangers facing the Earth today: global warming, rainforest deforestation and depletion of the oceans.

Produced by nWave Pictures in association with the World Wide Fund for Nature - The Netherlands (WWF), SOS Planet breaks new ground with dramatic digital effects used in ways never before seen on the giant screen.

One World. One Future.

All DVDs are Official US Releases and are 100% Guaranteed!

The Making of SOS Planet featurette

Comes with both Field Sequential and Anaglyph Versions included! 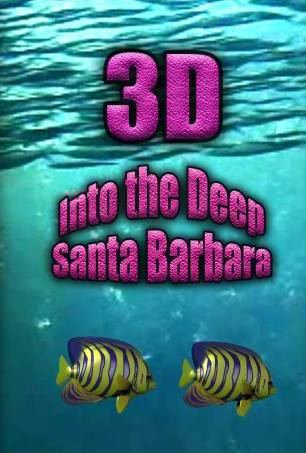 3D Into The Deep Santa Barbara In Real 3D

Join divers as they explore the bottom of the ocean off the beautiful California coast! Fantastic deep sea footage of fish, seals, dolphins, plants & much more!

Please Note: CRT or “Tube” type regular televisions are highly recommended for use with the 3D Video Viewing Systems. These types of televisions refresh their image in a very consistent manner, which makes it very easy for the 3D system to synchronize to the signal. So if you have a regular television read no further and press buy it now for an amazing 3D experience!

HDTV, Plasma, LCD, and many projection television systems refresh their image in a random manner making it so that many of these televisions are not compatible with 3D viewing systems. Basically some are compatible and most are not.

International buyers the 3D viewing systems will not work with the newer televisions that are 100 HTZ. These systems do work with your regular televisions and are the exact same models as Razor 3D Europe carries. Also the Virtual FX unit comes with a US power supply only and a International version is available for purchase separately.

Like us on Facebook and your automatically entered into our weekly drawing to win your choice
of fun prizes including FREE 3D Glasses or 2 FREE 3D Blu-rays of your choice!